Unbridled Joy and the Restoration of Heart

Towards the end of this summer, a cheerful stranger arrived at the back of the barn, darting in and out from under the horses’ feet. He was short, all white, bleating with excitement. He had a small beard, and thick curvy horns which would have hurt if he headbutted you, but he never did. I knew he was a Pygmy goat, but I didn’t know what kind. I had never taken care of a goat before, and I had no idea where he came from.
I named him Pistol because he was completely devoid of shyness and pushed his way into the center of everything. He was in command of the entire environment and moved from one scene to the next without missing a beat – Pistol Pete. I quickly learned that he was a doll, very friendly, came when I called him, loved being scratched, and cohabitated with the horses and Gina (the miniature donkey) without any spats or disagreements. And every day he was happy to see me, calling out to me and dancing around, sometimes up on his hind feet. Every day, his antics made me laugh.
I halfheartedly looked for his owner. The barn is a distance off the main road, and I had never seen him at any of the neighboring farms. I passed the word to my neighbors, but no one knew where he had come from. So, for a week, I settled into having a new member of the barn crowd. This past summer was 6 months into the disease of the century – the dang corona virus. I was exhausted working at the medical clinic, worrying every day about how to protect myself and my staff, and how to care for my patients who had contracted the virus. Every day when I drove home, as soon as I turned down my long driveway past the horse pasture, the day’s tension left me, and I could breathe again. Oh, the salvation provided by the land! And now, a new deliverance! As I came closer to the house and barn, there was Pistol – running from the vegetable garden or flower bed, where he had been helping himself to anything soft and green, running to meet the car, dancing and doing leaps as he came closer. Here at the end of a long day in an unrelenting string of long days was the farm jester, the loveable clown, the sprite who brought a chuckle every time.
One day, Pistol was gone. I assumed he had been taken from up in the pasture closest to the road – he had worked his way up there following Gina and the horses. Then my neighbors on the left called me to tell me he was in a dog crate at the back of the trailer across the street. I had never seen any animals there because the back of the trailer isn’t well seen from the road. And I was told that there was another goat caged up as well.
I couldn’t stand it. My carefree, gallivanting friend was caged, restricted, and who knows what else. In an almost manic frenzy I made phone calls, working my way from neighbor to trailer landlord, to his tenant – the guy who had all the animals – turns out there were chickens and turkeys and rabbits and goats and pigeons. At last, after repeated calls, the tenant and I connected, and I begged him to sell Pistol to me. I pushed the major persuading argument – Gina was devastated without Pistol – which is true, but truer was that I was devastated. I also worried about the other goat caged in a rabbit hutch and offered to buy him as well. I wanted Pistol back so much I was willing to take on care of another goat that I had never met.
Thankfully, the tenant agreed to sell me two white Pygmy goats, which I have since learned are called dwarf goats, and probably are the Nigerian variety. Pistol and Steamer. If Pistol was a chuckle, together Pistol and Steamy are a source of riotous laughter. They are full of elf energy, and like the Elf-on-the-shelf, you never know where you are going to find them. They have discovered the honeysuckle vines choked up in a tangle along one side of the pond. Delicious! And no worry, we are goats – we can walk out onto the ledge of tangled vines protruding out, 10 feet above the water. We never lose our step!
Oh, and of course! Goats love to climb high places. So many nights when I arrive home, there they are, having climbed to the top of the milk house connected to the barn, steep roofed on one side, but not at all a challenge for these sure-footed mountaineers. On these nights when I break out into a chortle, all the stress of life bubbles away. Pistol and Steamy have carried me back to the world where unbridled joy still exists, and my heart is restored. 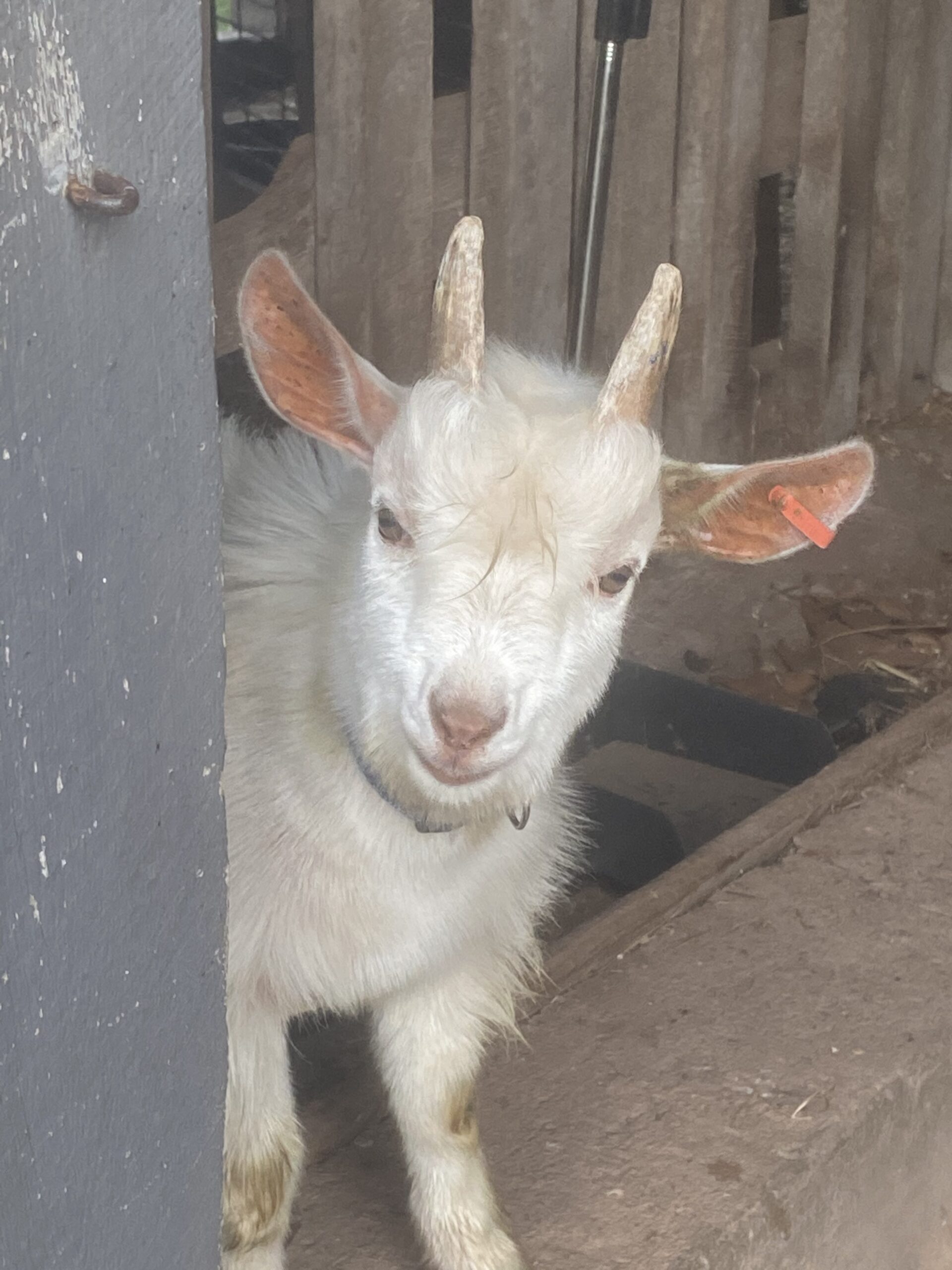